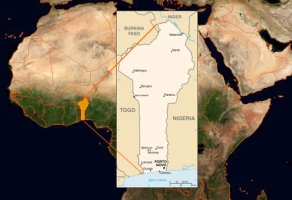 Benin is located in Western Africa and borders Togo and Burkina Faso to the west, Niger to the north, Nigeria to the east and the Gulf of Guinea in the south (Atlantic ocean).

The different ecosystems, from tropical grasslands, savannas and shrublands to semi-humid forests merge seamlessly. The climate in Benin is tropical.
In 2002 in Benin lived 6.6 Mio people from different ethnolinguistic groups, while the highest population density is in the south, where an economic agglomeration is located near the short coastline.

Many external circumstances constrain economic growth, but step by step development can be assisted, especially because Benin is in contrast to many other African countries under peaceful conditions since many years. An important first step for a sustainable development is the good education of children and teenagers.